“The most important fact to know about individuals with Down syndrome is that they are more like others than they are different.”
--National Association for Down syndrome

For anyone that has been reading this blog for a while or knows our family in real life you know that Riley is a pretty typical three year old.  He is busy, energetic and full of personality.  His smile lights up the world and its pretty hard not to smile back when he shares that big grin with you.  When I say typical I really mean typical.  He is doing great at preschool.  He is in a 3 year old room at the same school that Rex is a 2nd grader at and is doing great.  His babysitter attends with him because he is not potty trained, and while that isn't exactly typical, she doesn't assist him much in class as far as I understand.  He is making friends, learning tons and loving being three.

Last weekend we had our local Buddy Walk.  This is just the 2nd annual Buddy Walk here and really the first year that we made a huge deal of it.  We had nearly 500 walkers this year which is amazing and especially when you know that there were just over 100 last year.  As I watched the entire group gather to watch and show our support for all those that have Down syndrome  it truly was inspiring.  So many friends and families gathered to support their own buddy.  My friend Angie and her mom, dad and kiddos joined us to form our 9 member team, Hurricane Riley's Storm Chasers.  Unfortunately my  mom and dad weren't able to join us since my dad has been in the hospital for the last two weeks.  (That's an entirely different story but he is doing better but still stuck at the hospital)   It meant the world to me that Angie and her family joined us to celebrate Riley.  There were teams from all over the area  who came to celebrate.  One team will be featured in next year's brochure for having the most team members had 75 that joined them to celebrate.  I bet that mom was over the moon with pride that so many people came to celebrate her child.

Later that afternoon we took the kid down to the hospital to visit Grampa and I was telling my mom and dad all about the walk and how many people and and how amazing it was.  Riley had so much fun.  He loved the cheer leaders and spent most of the morning dancing and jumping with them.  Pom poms are the best! 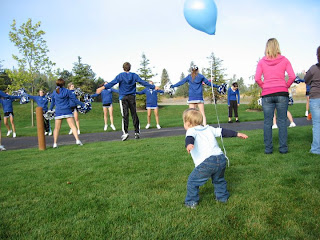 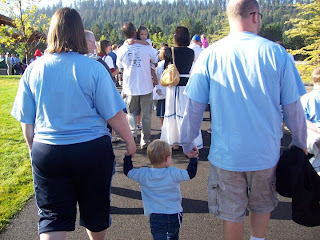 As we were chatting about all the fun we had my mom said  something to the affect that  Riley is such a typical three year old you almost forget that he has Down syndrome.  Could there be a better compliment?  Probably not but at the same time I don't want everyone to forget. I guess that is part of the reason the Buddy Walk is so important to me.  So important that we celebrate Riley and all the others that have Down syndrome.  I think this is where I am most conflicted.  I want the world to see Riley as a typical 3 year old but at the same time I want those that know him to understand that he works SO hard to appear so typical.   Is it possible to have both?
I don't want my friends to get sick of me talking about how hard Riley works at therapy or how much progress he is making at school, but at the same time I want everyone to understand.  I want everyone to  know that Riley doesn't just know how to do things like a typical three year old.  He works and works and works to accomplish what his buddies so easily master after just a few tries.

Thank you to all of my family and friends that support and love Riley!