Grab This Button
Rex and Riley are busy!  There is just no other way to describe our schedule.
Riley goes to preschool 4 days a week.  Twice a week he goes to two different preschools as well as private speech and occupational therapy. Rex is playing soccer with practice twice a week and games on Saturdays as well as belonging to the Cub Scouts.   He is also working on his Sacramental prep classes so he can complete his first reconciliation, first communion and confirmation this spring.   Rex decided to join the children's choir at church that thankfully practises on Sunday mornings between the masses so it doesn't conflict with anything else.
There is a lot of coordination of schedules and shuffling of kids from there to there that goes on to get every where we need to go including work most days.  This evening for example I had to make it home from work in time for Justin and Rex to get ready and leave for Cub Scouts.  This was the first scout meeting that Justin and Rex were all dressed up in their uniforms at the same time so of course I forced  asked them nicely to let me take their picture. 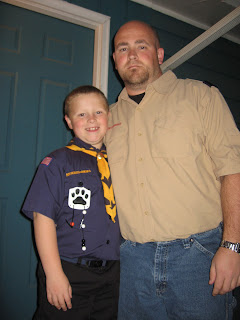 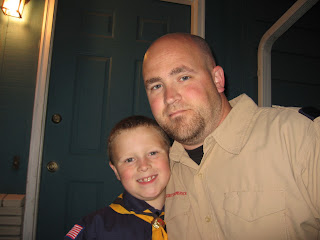 There was a time in my life when I wouldn't have thought that a grown man all dressed up in a boyscout uniform was anything but creepy.  OK Sometimes still creepy but tonight creepy wasn't the adjective I would pick.  Tonight sexy wins the adjective of choice.  Who wouldn't find a dad willing to volunteer to lead his son's Wolf Den completely attractive.  Justin is an amazing dad.

OK Mom's time to play along.  What do the men in your life do that you find completely attractive that you wouldn't have ever imagined that someday it would make you week in the knees.