Happy 6th Birthday my little man.  It is hard to put into words just how much you are loved by your family and friends.  Rex and your dad and I are so very blessed that you completed our little family.  We didn't know when you were born but we soon learned that you are a perfect fit in our crazy little world.  You have been busy teaching us to be more patient, understanding and compassionate over the last 6 years.  We are certainly a work in progress but you have taught us a lot.

It has been another great year for you.  You continue to amaze people daily.  I have spent so much time worrying over the best school for you and once again you have showed me that you will succeed where ever you are.  You have certainly taken All Saints by storm and have made yourself and integral part of the school.  Trust me when I say that they will never be the same.  I am pretty sure you know all of the kids in k-4 by name and can get them all to give you a hug on command.  You certainly have the social part of school down pat.  You are learning to read and have a huge list of site words you know.  Writing continues to give you a headache but you can do it.  You will be writing like a champ before I write your 7 year birthday letter.

Your very best friend, Ella, and her family joined us for dinner tonight to help celebrate.  You two have been friends most of your life and it is fun to watch you together.  Neither of you walked or talked when you started playing in the same room.  Now you both are so busy bossing each other its hard to get a word in edgewise.  You both have genuine concern for each other and truly enjoy playing together most of the time.  Riley your Great Grammy June used to say that a person is truly blessed if they have one really close friend.  You certainly have a beautiful blessing in your friendship with Ella.

Truly I don't think you have met anyone that isn't your friend.  Riley you have a beautiful spirit that draws people to you.  Your quick smile and mischievous laugh keep make them want to be friends for life.  You have brought countless people into our world and we are so much better for it.  I know that by simply being you and laughing your way into peoples heart you have changed many peoples view on what a child with Down syndrome is like.  I think I will always worry that people will judge your beautiful almond shaped eyes before they know you but that worry get a little less as each year passes.  Time and time again you show me that if they look for just a moment at the twinkle in your big brown eyes they will see an amazing little boy.  A boy that knows no limits that will accomplish anything he puts his mind to.

Riley someday far into the future you will read these birthday letters and I want you to truly understand how very much you are loved by your family and your friends.  You make us all better because we have you in our life. Even on the days I'm pretty sure you have given me more gray hairs with your antics I love you more that words will ever be enough to explain! 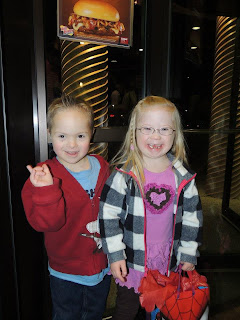 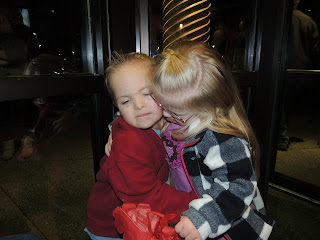 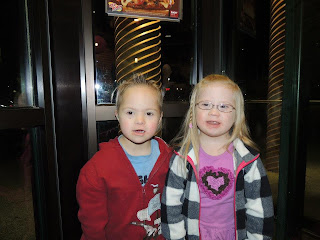 Riley had to give his first report at school today.  The assignment was to choose a Saint and learn about them and then report back to the class on your saint while dressed as your choosen saint.  I scoured the internet looking for the patron saint of Down syndrome but wouldn't you know thats about the only thing we catholics don't have a patron saint of.  There is one guy they are working on but I wasn't about to send him to school with a almost saint.

So we went the next best route and choose St Francis of Assisi because Riley LOVES LOVES LOVES animals.  Not truly sure how to help facilitate Riley completing this project I'll admit I simply chose for him and wrote in the few facts that he needed to report on.  Then we rehearsed his line.  Saint Francis LOVES animals!  Riley had it down and for those of you who are friends on facebook you know he had it down a week ago when I sent him to school in costume a week early.

This morning we practiced again and put on the costume which consisted of an Old Navy tshirt of Justin's with a shoelace tied at the waist.  I looped a rosary at the waist and he carried a beanie baby bird with him.

I picked him up at school this afternoon anxious for a report and the teacher is cracking up giving me the days update.  The morning went well.  They paraded through all the older classrooms and apparently he had to tell all the teachers he was St Francis and he loved animals.  I've heard from a few parents that their kids loved his costume.  One mom said her daughter tried to give him a fist bump but he insisted on a hug.  I love hearing these tidbits about his day from the kids.  He is so loved at school.  After the parade they went up to church where they talked with Father Mee.  When asked who he was Riley replies "I Riley".  Oh well at least he told everyone else he was St Francis.

The day degraded after that.  He lined up great from recess but then made his escape as the came down the stairs.  Apparently he hid behind the statue of Mary that sits in the court yard.  I think Rex's teacher will help him remember to go up to recess to help Riley back to class since she was on duty and couldn't get him to get back in line.  The reading teacher came out to wrangle help Riley so that the other teachers could take their kids back to class.  It took some negotiations but she was able to get him out from behind the statue and back to class.  Thankfully she has a great sense of humour and loves Riley.

Rex's teacher in her cute Scottish accent had to stop Riley's teacher to see how St Francis managed with Mary.  Riley is so very lucky he is so darn cute.  Only with the sparkle in his eyes and his smile does he keep himself in every one's good graces. 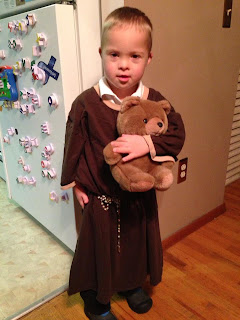 There was an all school mass on Friday with special intentions for Veteran's Day.  K-3 put on a short program after mass to celebrate.  Riley's class sang I love Freedom and he loved waving his flag and marching.

Riley doesn't understand what it all means but someday he will.  Someday he will understand all the sacrifices that others have made to allow us to live in this great country.  For today he looked pretty darn cute waving his flag and doing his part to say thank you to all the brave men and women that serve.