I don't have anything profound to say or feel like reflecting over the whole Down syndrome thing.  Riley has been such a typical lil stinker of a three year old that most days it doesn't feel like he is any different than his brother was a three.  Rex talked more and was a bit calmer and less likey to jump off of anything and everything that he could find but my mom friends tell me thats pretty typical for a 2nd child.

I do have a great story to share about Rex attending a birthday party for a school friend yesterday.  His buddy John Paul has been very interested in Riley all school year but as we were dropping Rex off at the YMCA for the swim party John Paul came over to see us.  He always has something to say and tries to get Riley to say peace.  Rex and his buddies all pound their chest and then throw the peace sign out while saying PEACE.  Its pretty funny when the 7 year olds do it but stinkin hysterical that they taught Riley.  So when John Paul ran over to see Riley we didn't think much of it.  He then has quite a conversation with Justin where he proceeds to ask  "so Riley has a a a disability?"  Justin confirms that yes Riley has Down syndrome.  JP then says   "so will it be taken care of in about a year or so?"  How Justin managed to keep a straight face is beyond me but he tells JP that actually Riley will always have Down syndrome.  JP then says "oh really"  and is content to give Riley Peace again and then proceeds to walk over to Rex and ask "did you teach Riley peace?"  Rex says "ya" and then JP says  "well ya need to teach him the ABC's now".

Rex really has made some of the nicest friends at school.  John Paul's mom has been fighting cancer over the last year and I'm sure that is part of the reason he thought that Ds would be "taken care of" in the next year or so.  I so love that after Justin tells him that he will always have Ds he is totally and complete indifferent about it.  Its just Rex's little brother and that is all that matters.

For those of you fans of the Ella and Riley romance here are a couple of photo's of two of the funniest kiddos I know.  These two have more personality than most will ever dream of. 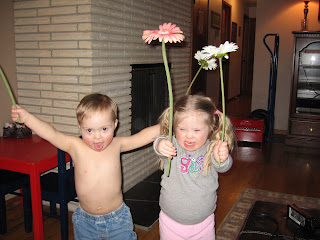 For those keeping score the wedding is back on! 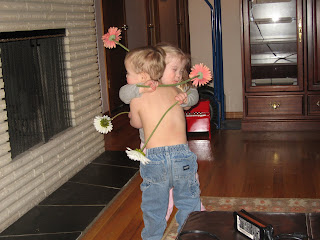 This weekend Rex had his big Pinwood Derby with his cubscout Pack.  He and Justin had been working hard on his car.  They researched the design online and Rex did all of the sanding.  He picked the color and decals and helped with every portion he could. We thought it was best not to turn him loose on the powertools quite yet but he did get to use the drill.


Justin and I are very proud of Rex and the work he put in to make the Zoom Car. 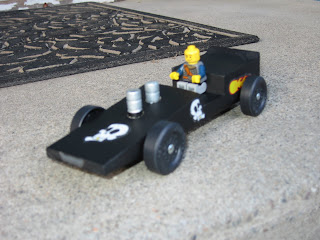 We were ready for the big race! 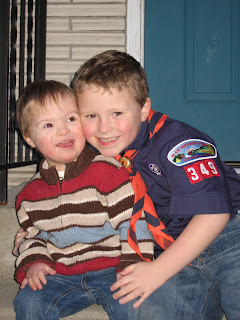 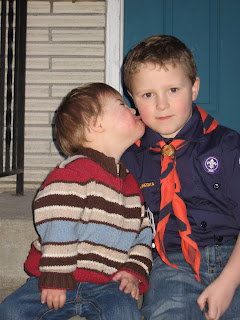 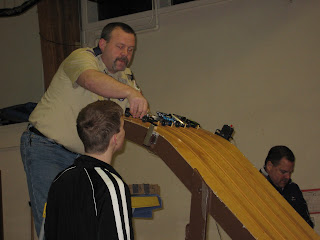 Picture the checkered flag or the sound of the gun -  we are off to the races! 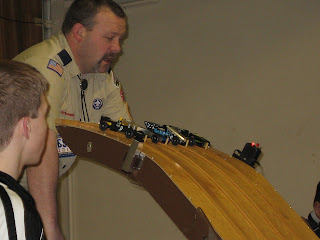 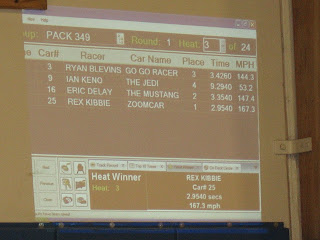 Things slowed down a bit after the first heat.  Rex had a great night cheering for his buddy Mason that ended up first in the Tigers and 3rd over all in the Pack. 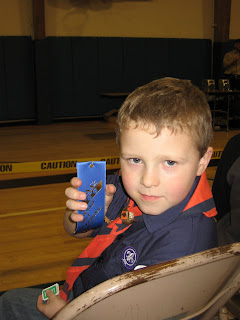 4th Place in the Tigers 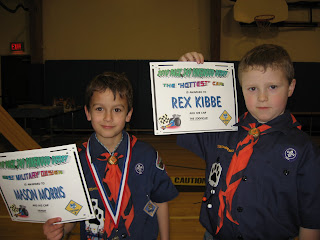 Rex was a bit bummed he didn't win a medal but he was a very good sport and cheered on his buddies.  The plans for Pinewood Derby 2011 are already in the works.
Posted by Mary at 8:08 PM 3 thoughts to share