Riley just hasn't been able to kick this cold so off to the Dr we went this afternoon.

This kid still loves a mirror!  Thankfully we are past the days of "kissing" aka licking the baby in the mirror. Has full conversations with his toys and the Riley and toys in the mirror.

Crazy behavior is one of the biggest signs that Riley isn't feeling well.  For example he his under the desk at school and told his aid to go away for the first time this year.  He will argue with you on any topic possible.  The worst was when he was yelling at Rex because the wrong song was on the radio.  It gets pretty comical. 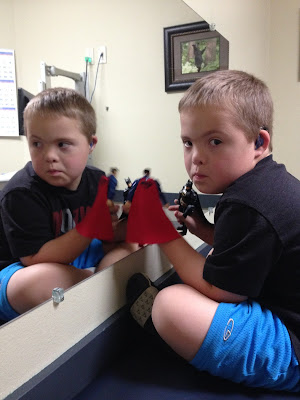