Today was the end of the year championship for Rex's flag football team.  It was COLD and wet but it didn't actually rain during the games.  The boys have had a great season and have so much fun playing together.  Such a great group of boys he goes to school with!  Rex's team wasn't huge to start the season but with one kiddo out with an injury and a few others with family commitments they didn't have any substitutes.  It was a busy day for a team that had to win three games to win the Championship. 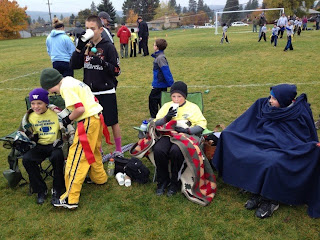 Between games they cuddled up and drank hot cocoa to stay warm.  Gramma even loaned Rex her gloves.  He really liked the bows! 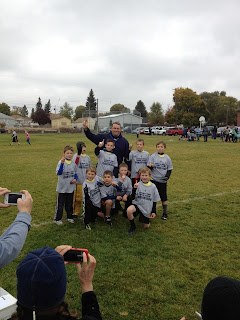 It was a tiring morning but the kids play great and pulled off the Championship.  They are officially the
Catholic Grade School Flag Football Champions! 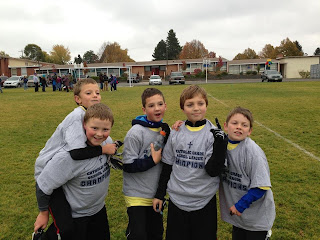 And for those of you keeping track football is officially over and wrestling starts this week.