Today was a successful day. I'm glad you sitting down because this might be a long one. First my sister in law Libby called this evening for the "boobie report". Hers are fine. After a little scare with a lump all the test have come back good and there is nothing to worry about. Well that is other than the large bruise she has on her elbow and tushy when she fell on the one and only piece of ice in the parking lot on her way in for the the big squeeze. I'll leave out the details for Libby's sake. She may not want my mom to know all the words she muttered (yelled) at God at that very moment as she laid in the parking lot crying. Sorry Lib I had to share. It was too good not to.

Second, well actually first since it happened earlier in the day Kacey called and Ella's surgery went smoothly. You can read the entire report of the surgery adventure at The Amazing Ella Grace
Riley has become quite the little independent man since he starting walking. He has been changing daily. He has started really hugging. He has always been a cuddle bug but now he actually squeezes you back and wraps his arms around your neck. There is nothing better than big squeezes from your kiddos. 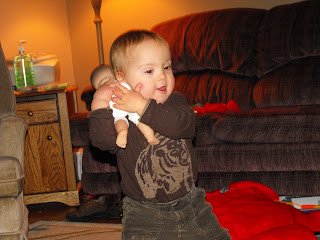 He was walking around the house giving his baby hugs tonight. Note the baby is naked. For some reason Rex insists on taking all the clothes off any doll, army guy and so on. WEIRD!

Riley has also figured out that when Justin and Rex play the Wii it is really fun. He wants to play too. Tonight they were playing Mario Kart and Riley wanted to play too. 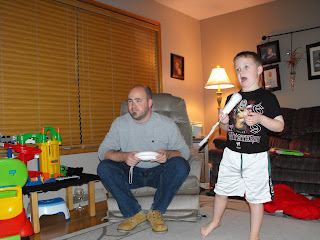 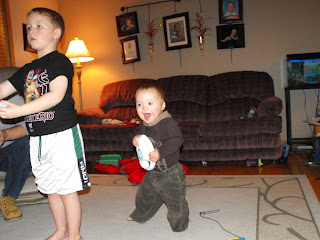 Meghan, his speech therapist, would be so proud to see him driving his car. They sing a great little song at circle time that involves driving a car. We are even getting some car noises. 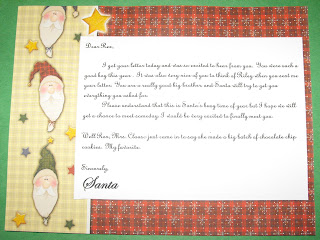 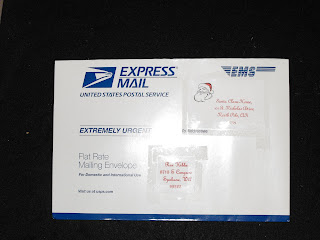 Possibly Christina, our nanny, is the sweetest thing alive. She and her husband Ron asked if they could take the boys to the Christmas party at the airforce base where Ron works as an aircraft mechanic. The big party is this weekend and Christina has been working to make sure this is a really exciting experience for Rex. Well Ron is on away on TDY (evidently and airforce term that means he is gone for two weeks) and Christina still is taking the boys. I am excited to hear how the big party goes. Rex still doesn't know what is coming on Saturday since it is a big surprise for him and Riley. Keep your fingers crossed that he appreciates all the effort that Christina has gone to and has a ton of fun at the big Christmas party. I'm positive that he will have fun but I'm hoping that he actually expreses how much fun he has. This summer when Christine took him out to the base and Ron took him in the cockpit of an airplane he didn't exactly act like it was cool, but then when he got home it was all he could talk about. UGH I will be sure to post pictures - Christina promises to take a ton.
Posted by Mary at 7:41 PM