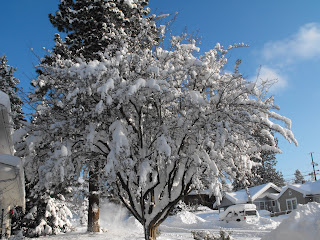 As 2008 comes to a close and I sigh a huge sigh of relief I thought it would be a good time to put down on paper my plans for the upcoming year. I won't go so far as calling them new year resolutions so we'll stick with calling them plans. I don't think any of them will magically happen on Jan 1 but I will slowly pick a way at them and see where I am when 2010 rolls around.

I thought it would be fun to go for one thought or plan for each inch of snow that has fallen here in Spokane during the month of December. Well since we have passed the 63 inch mark and there is a predicted 2-5 more tonight I think we better go with one per foot of snow.

4. Be healthy - mental and physical

6. Learn to crochet - I threw that one just in case we get more snow than predicted tonight :-(

2008 started at 5am cleaning vomit off of Rex, his bed and the wall. I knew instantly that it was a bad omen to start the year. I guess nothing really really terrible has gone on but it hasn't exactly been all peaches. So as I start this new year I am determined to make some changes that will hopefully make life run a bit more smoothly and keep my sanity at the same time. I wonder if that is possible.
Posted by Mary at 10:03 PM