I am not ﻿exactly sure why I've been struggling so much posting this year during 31 for 21.  Riley typically gives me plenty of stories to share.  This year we seem to be pushing the limits of what we can keep up with as a family.  I think we all have those moments in life where we push a bit too hard and one of the dozens of balls that are up in the air fall.  I feel like its better that the blog challenge is the one to drop instead of forgetting one of the kids at school or something exciting like that.

We had Riley's IEP meeting meeting last week.  I love his teacher but it is always seems a bit overwhelming to have to digest all the goals and plans for the next year.  This IEP will stretch over the beginning of kindergarten so it included what we are estimating his needs to be during that transition as well.  We will revisit in the spring when we start the transition planning but still a bit unbelievable that he will be headed to kindergarten next fall.  We have some big decisions to make about his placement in kindergarten.  If he stays in the public school he appears to be headed to the integrated kindergarten at our neighborhood school.  That room has 18 kids with 6 of them on IEP's.  We are still highly considering sending him to the Catholic school that Rex attends in our neighborhood.  Glad I don't have to decide today!

Riley's teacher is really stressing writing with him this year.  She started to write one goal to state that he would be able to write all of the upper and lower case letters.  Her supervisor made her rewrite it since that was a grade level.  Apparently he can't have goals that would be considered at grade level.   So the technical goal was rewritten to state that he would be able to write the letters of his first and last name in uppercase and lowercase letters.  He will work on all letters and she will record progress on the letters in his name.  Works for me!  It kills me that our kids can't have goals that would be considered on grade level.  If he can work on grade level he is at risk of losing his placement.  It isn't as if he is suddenly going to not have Down syndrome.  It is crazy that he could lose some of his services if he does too well.  Why oh why should we wait for our children to fall behind before they can get the services they need. 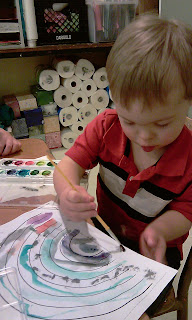