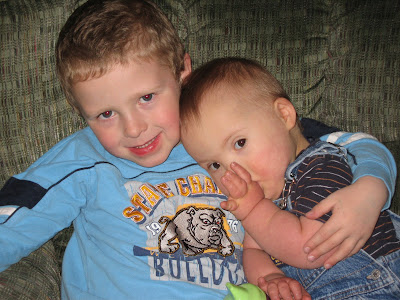 1. Find a Dr. you can trust and stick with them. I feel a bit like our pediatricians are a part of the family. I see them on a very regular basis especially now that cold season has started with Asthma boy and his side kick wheezy.

2. Cliches not to use in a time of stress. My friend Amy and I think that we will make millions when we publish the book that started with just a list of things not to say to Mary. (cause wow was I pregnant and moody when I discovered Riley would have Down syndrome) Since Amy and run neck and neck for the coveted Drama Queen title we have a list for most crisis situations.

3. Who my friends are. I have some really amazing friends.

4. How much my mom means to me. Growing up I don't ever remember not liking my parents like most teenagers do but we have certainly grown much closer in the last several years. I don't know how I would have managed to get Riley to therapy twice a week for the last year with out my mom's help.

5. OT, PT, Cognitive therapy - and a zillion other ways to "play" with Riley to help his development. I think we should rename it all and call it Play therapy. Maybe it would seem so over whelming if I was just headed to play date a couple times a week.

6. How to fight with my insurance company and occasionally win. So I can't believe I'm actually typing this and please don't be too offended by it. Riley started weekly PT and Speech therapy on Valentines Day, he was 10 weeks old. In approximately May all of his speech therapy was denied and I mean all of it. I guess it took 3 months to figure out a reason not to pay for it. They had no issue paying for the PT but wouldn't pay for the speech because it wasn't "corrective" in nature. So I had fought with several people and this poor fool that answered the phone at Cigna this particular day got an earful. He was going on and on about how if Riley had been speaking before and then lost his speech they would be more then happy to pay for his therapy. It was when he asked me how much Riley was talking that I lost it totally. After I asked the agent if he new many 4 month old children that could talk I possibly added something like so.......you'll teach to retarded children to walk but not to talk. I was so angry all I could think of was that Riley could get all the help he needed to learn the physical side of things but we wouldn't want him to get to advanced and speak clearly. OK like I said not one of my better moments but still I did eventually get the therapy paid for.

7. Children with Down syndrome tend to have the cutest hands and feet ever. How can you not fall in love with the short chubby little things.

8. It isn't a good think to growl at everyone who tells you that those kids are so loving. This is one of the items that belong on the list that Amy and I have made. This is just one of those statements that drive me insane. I would like to think that my children would and are both loving and happy because they live in a loving home. We might be crazy but we are loving :-)


10. Notice the little accomplishments in life. When Rex was tiny we just took it for granted that we would moved from milestone to milestone. I wish I would have paid more attention to the details.

11. Small inside jokes can take on a life of there own. I was so tired of people talking about Riley as "one of those" or "they" that I may have freaked out one evening over dinner when Justin and I had escaped on a date night and were out to dinner with Jeremy and Angie. Well, in a totally off color and yet hysterically funny way Jeremy points out to me that a family we happened passed had a child with Down syndrome, but it went more like "Hey Mary! they got one of them kids too!!!" and with that it started. We often joke with our other friends that have "one of them". I think I have everyone around me paranoid about making generalizations about Riley.


12. The bond between brothers is immediate and very strong. I have been amazed by Rex and the instant total and complete love he has for Riley. I have no doubt that he will always be his protector. I have been worried about how having a brother with Down syndrome will affect Rex... so far I don't think he realizes that all babies aren't just like Riley. If he does he certainly doesn't let on. Rex gets so excited when Riley learns something new, he has a huge sense of pride in teaching Riley. Since I was pregnant with Riley, Rex has had a list of items he will teach Riley. He is currently about to check off "teach Riley to walk" and then I think he is moving on to riding a bike. Both of these activities are entirely more exciting than teach him to sit on the sofa which was his first item on the list after I explained that Riley wouldn't be able to walk and ride his bike for quite a while after he came home from the hospital.

13. I used to think that I was pro choice and proud of it. I have always thought I though I could personally not terminate a pregnancy it was not my place to decide what other women did. Not too terribly long ago I had a couple of encounters with people that were facing a prenatal Down syndrome diagnosis and were leaning to termination. I now know that I am not pro choice. How could you possibly terminate Riley. It is personally offensive to think about.

14. I could adopt. One of my worst fears before I had children was that I wouldn't be able to conceive my own child and I would have to decide if I was able to adopt a child. I have two adopted sisters and it has not always been a bed of roses. When I hear the statistic that 90% of pregnancies with a prenatal diagnosis of Down syndrome are terminated I am sick. I know that I could take any one of those children and raise them as my own.

15. Sign language- I love the signing times videos and so do both my boys. Rex has picked up a ton of signs very quickly. He is much better at it than I am. I think it is so cool though that my family and friends are trying to learn Riley's signs too.

16. 80% of children with Down syndrome are born to women under the age of 35 Not could could it happen to me at 30 but it did and I'm by far not the youngest of my friends to have a child with Down syndrome. We have so much education to do still.

17. My house will never be clean. EVER I'm not known for my housekeeping skills but I attempt once in while but seriously they should make a carpet that goldfish crackers and cheerios blend in with better.

18. My fear was a waste of energy. I was so afraid of having a child with Down syndrome. If only I new then what I know now. I wasted a lot of time crying and afraid of what our life would be life and what Riley's life would be. If only I new how wonderfully normal and crazy it would be all at the same time. I wish everyone that knew they were having a child with Down syndrome could meet a child like Riley. Then they would understand.

19. Journaling is a stress reliever for me. While I love Riley to pieces he has also brought some added stress to my life. It is a challenge to keep up with his therapy schedule and Rex's soccer schedule plus any other activities going on and not feel a bit like I'm running in circles. I'm so glad I have found something to help me process it all.

20. I'm a sap. Who knew I could be that excited to see a new born baby latch on to a pacifier. Woo hoo he could suck and that means he'll be able to eat. Or be moved to tears watching a child roll over for the first time. Not only have I been so excited for every new milestone but I see and appreciate them so much more when I see other children do them.

21. I would not trade my crazy life for anything! We have our moments but I wouldn't trade my three boys for anything. I have a wonderful husband that I love dearly, and two hysterically funny boys. 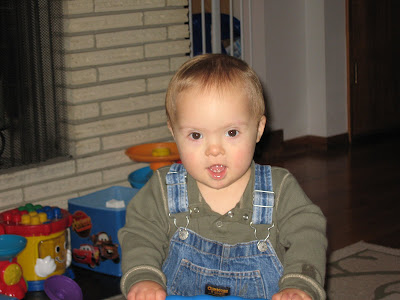