Riley's preschool class at All Saints walked across the street to the public library last week.  They had a grand adventure and were able to listen to a story while they were there. 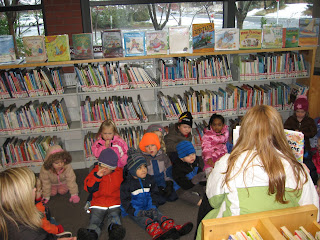 Riley loves to listen to stories.  I'm always surprised to see him sitting so nicely but its captured on film so I know it really happens. 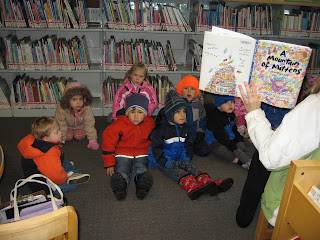 Riley is making friends at preschool.  This is one of his favorite little friends.  He has always had an eye for the pretty girls! 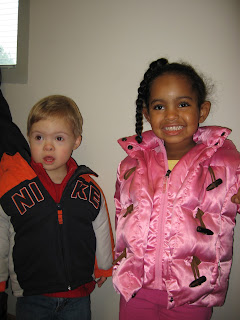 Riley doesn't always like to sit and listen.  His afternoon teacher coined this his Jack Black look last year.  You know he is getting really comfortable in his surroundings when he pulls this look out for you.  Its better head on but this picture captures it pretty well.
﻿ ﻿
Riley is really into his pretend play.  Lately making his Elmo and Grover sleep and covering them up is a favorite.  Today he thought he'd sleep too! 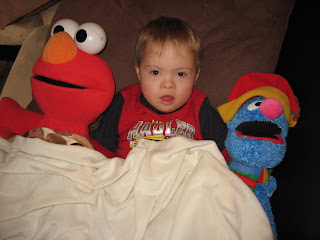 ﻿ ﻿
Well that is what Hurricane Riley has been up to lat﻿ely.  We are starting to gear up for this 4th birthday.  Its hard to believe its coming up so soon.    I've been looking at write and scribble toy from Leap Frog for Riley.    It looks pretty cool and appears to be a nice way to practise tracing letters and numbers.  Let me know if you've used it or if you have other great gift ideas.   Birthday and Christmas have me stumped  for both boys this year. I am in need of inspiration and I'm hoping to find some during my annual day after Thanksgiving shopping adventure with Angie.  Guaranteed hysterical fits of laughter even if not much is purchased.
Posted by Mary at 1:13 PM