After the Ds Connections picnic we decided to try out camping with the boys.  We took Rex camping in 2008 and he had a blast but we had left Riley home with Gramma and Grampa that trip since he wasn't walking yet and we just couldn't picture a tent with him.   The resort we had the picnic at had such a nice faciilty and easy beach access we decided to give it a try.  We joined Kacey and family for a short one night camping trip.  We all had a lot of fun.  The kids had an absolute blast.  It was hard to get Rex out of the lake.  He was loving the water!  Riley had fun playing in the sand and splashing around.  The best part of camping with friends is that Rex and Riley both had buddies to play with.  Riley and Ella played so well together.

Justin and were planning on making another camping trip over Labor day with my parents since they travel with the 5th wheel I was hoping for a bit more comfortable bed.  Possibly one that didn't try to swallow me during the night.  Its not going to work out so we'll have to look forward to next summer for some more camping adventures. 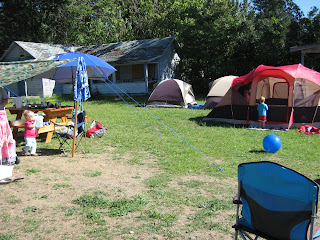 Tent City...  we lived in the little two in the back.  Rex and Justin on the left and Riley and I in the right.  I keep holding out buying a bigger ten in hopes of getting a little trailer.  Next summer I might have to give in if the 4 of us want to go again. 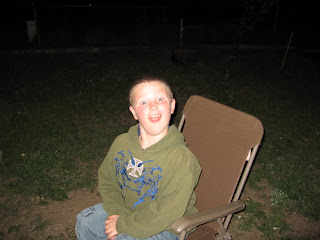 Rex being Rex while hanging out at the campfire 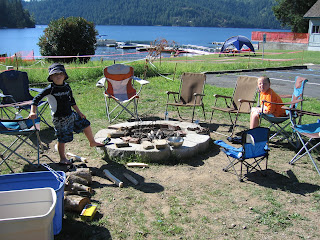 Breakfast with a view
Posted by Mary at 10:11 PM