The Better to Hear You With

I wonder if I'll ever stop being surprised with what I learn when I pick Riley up at the end of a school day.  As I waited for Riley's class to finish their end of the day prayer I was excited that he appeared to still be wearing his hearing aids.  This is huge as he has been a total nightmare about wearing them lately.  Well as I watched him peel his hearing aid out of his new holder and pull it apart I realized that he was still wearing the holder but neither of the aids were in his ears.

As the kids left the line up I went straight to him and we talked about his hearing aids and where they both were.  He handed me the two parts of one of the aids and then melted into tears so he wouldn't have to talk to me.  He knew he was busted!!!  Insert deep breathing exercises here...not so good to freak out on your kid while the teachers are watching. 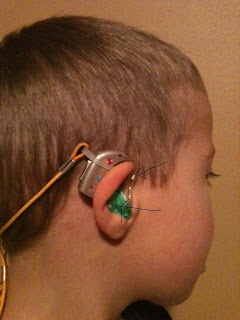 I made him cry more when I stripped of his snow pants hoping to find the other hearing aid but no such luck.  I did find play dough and 3 small blocks.  I was trying to calmly ask Riley about where he put his hearing aid but he just pouted and wouldn't make eye contact.  The teacher and substitute that was there to help with testing both helped me look and we did eventually find the other aid in the bottom of his back pack.  Well we found it minus the green mold.

His teacher back tracked through his day and realized he had only been out of the room for a quick trip to the office while the teacher took the rest of the class to PE.  (Riley stayed with his classroom teacher since there was a substitute for PE - its better for everyone that way)  Its freezing stinking cold so inside for recess and he stayed with his teach pretty much the entire day.  Lucky lucky Mrs Theilman.   At least she said he had a good day.   At some point during the day he took the hearing aid off and stashed the parts and I'm sure the bright green mold will turn up eventually.  The picture to the left shows Riley's hearing aid with the leash we put on it to keep him from losing it.  The arrows are drawn at the top wear the tubes that are part of the green mold attach to the rest of the tube that is attached to the actual hearing aid.

The green part is replaced as he grows and really isn't cost prohibitive from replacing if he hides it.   Last week after racking my brain for reasons that Riley was refusing to wear his hearing aids it dawned on me that it had been about 9 months since his last set of molds.  In that time he has grown a pants size, a 2 shirt sized and a shoe size so silly me for not thinking about out growing them.  We were able to slip in a get impressions for a new set of molds that will arrive next Friday. 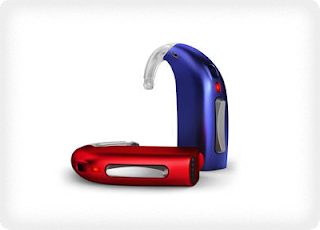 We choose to go with a more neutral hearing aid color for the actual expensive hearing aid body, but you can see it is available in lots of fun colors.    This is the portion of the aid that makes me sick to think of replacing.  Riley's set was roughly $1600.  As a point of reference in our lives that is more valuable than the car Justin drives to work everyday.  Thankfully my insurance changed right before we learned he needed these and we have an amazing plan that actually covers hearing aid.  Little know fact:  most insurance plans do not cover hearing aids no matter the reason for the hearing loss. 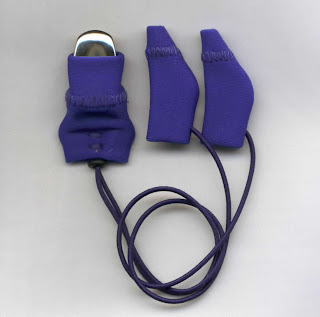 While we were there I asked the audiologist for recommendations on a new "leash" that we might have better luck with since he has figured out if he just yanks on his current one it comes clear off his shirt and he can chuck the entire mess anywhere. Pretty much defeats the purpose of putting it on at all.  She gave us a sample of Ear Gear  pictured to the right.  These fit over the hearing aids like sleeves and come in lots of colors but the best part is that the clip that attaches to his shirt has little claw teeth in it and locks into place.   It works a bit too well when you forget to send directions for the teacher and she cant get it off even when he refuses to keep the hearing aids in his ears.  So while the hearing aids dangled off their leash they were too tempting to be ignored.   If you notice in the picture above there is a tube attached to the hearing aid.  This tube is made of hard plastic and is not designed to come off but apparently Riley can get it off.   The hearing aid I found at the bottom of the back pack was missing this key piece.  Who knows if it will be attached to the green mold when that turns up??

So after this hide and seek game was over we headed out to Riley's ENT appointment that he was 15 minutes late for.  The good news is not only are his tubes still in place but the hearing aid office is in the same building.  We snuck upstairs and miracle of miracle they are able to fix the hearing aid and it will be all ready to go when we pick up his new molds next Friday.

Are you tired yet???  I am.  Seriously I need to learn not to react when he does this stuff.  It would sure save me a lot of energy if I didn't stress.  I should know that these hearing aids have a life of their own and somehow keep on ticking.  They have spent a night outside in the school playground, a night in our driveway inches from where Justin pulled the van in, lots of time under most of the furniture in our house, countless hours under couch cushions and the list continues.  Oticon makes a really really sturdy product and I really should send them a letter to tell them just how amazing these aids are.

And just for a fun a couple shots from the kids playing in the snow this weekend.  Loving my new camera!!!